The Mis-Adventures of Eddie

The Mis-Adventures of Eddie is a graphical adventure for the TRS-80 CoCo.

Hiking in the mountains one sunny morning with your trusty golden retriever, you come across an abandoned mine shaft. Dust and cobwebs fill the tunnel, looking as if no one has been there for decades. You get your lantern out of your backpack and shine it down the shaft. Several crickets now become silent as you gaze down the tunnel, which goes on as far as the eye can see. Suddenly your dog takes off down the shaft, barking madly. You chase him with backpack lugging from side to side.

As you run after your dog you remember an old tale. Many years ago, there was a mining family who would not leave their boom town, even when the mines were empty of gold. They told people the mines held more that they thought. This family was after something much more, they wanted to live forever, and claimed the mines prolonged life. People called them crazy and left them to their fantasies. Several months later a mining shaft collapsed, tragically killing the miner's wife. Nobody has heard from the miner or his son since, but some say they still live in their mine, happy and content, almost a century later. But really, that's just a story told around a campfire late at night. Now where did that dog go?

As the player enters the caverns, they meet the old man, and learn that his son has escaped into the time continuum and may change the course of history. The player moves through a maze of tunnels. In this maze, are a series of fields of mist, which take the player to different time zones, each one containing Eddie. In each area, the player must collect gems and stop the bumbling Eddie from messing up history.

All commands are created by typing VERB NOUN entries. There are a limited number of hints available per game. There is a save and restore feature. The time and compass direction are displayed on the screen, including available movement directions. 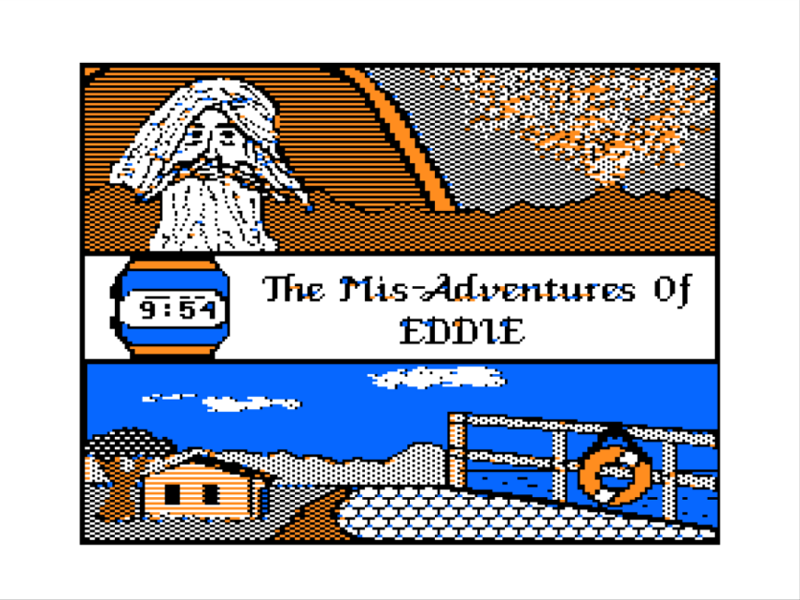